First go with a 4x5 monorail

First go with a 4x5 monorail

I took a small step into large format. I've done some quarter-plate before, but that's with an Ensign Reflex, a big wooden SLR, which I use on a neck-strap mostly; a world apart from this new camera, so I think this is my first real large format.

I spotted a Calumet CC-401 monorail on Ebay, being sold with a low start-price, collection-only, and 'for parts or repair'. I couldn't resist bidding, and got it for a very reasonable price plus a thirty-mile drive to pick it up. The faults with it are actually pretty minor; the guy selling it (on behalf of a college) said one of the standard locking knobs needs attention, but it seems to work for me. Another of the knobs has lost some of its plastic, but works fine. Everything else works; it was grateful for a clean and a little grease here and there. It came with an eight-inch Wray process lens, which again looks pretty good once cleaned, but doesn't have a shutter. I've taken that off the lens-board for now, and fitted my Rodenstock/Polaroid Ysarex 127 mm f/4.7. That seems to cover ok, though I don't suppose I have a lot to spare around the edges. It means there's half a mile of rail poking out front and back of the camera.

Getting a camera this big meant I needed a new tripod, and I picked up a Benbo with a biggish Velbon head on it. Also three double dark-slides and a box of Fomapan 100.

I've taken it out once, and it went ok. I drove out east from the city to a place with an isolated church in a meadow - where I thought I could collapse the tripod, drop the lens in a cow-pat, break the ground glass and fog all the film, and swear freely out of the public gaze. I didn't set out to choose pictures that really demanded camera movements, but I tried some anyway. I'm roughly aware of what the movements are used for, but haven't done my homework on that; I mean to read a bit before going out again, and maybe choose my next day's subjects more for practice. Previously, I've only really used front rise. 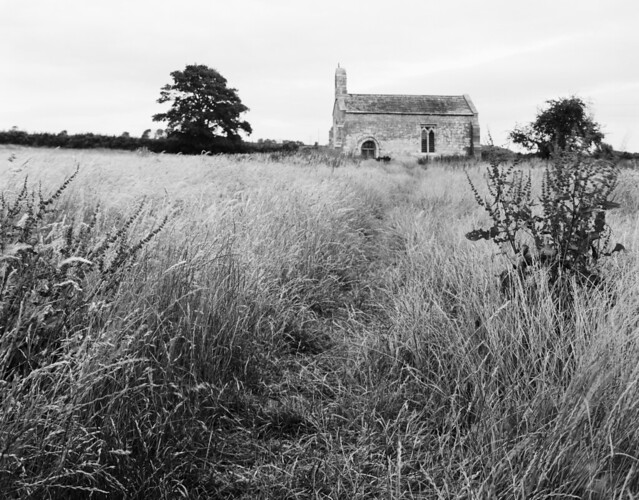 Whether or not I got the focus and movements right, some stuff outdoors, like the dock here, moved in the wind during my exposures. 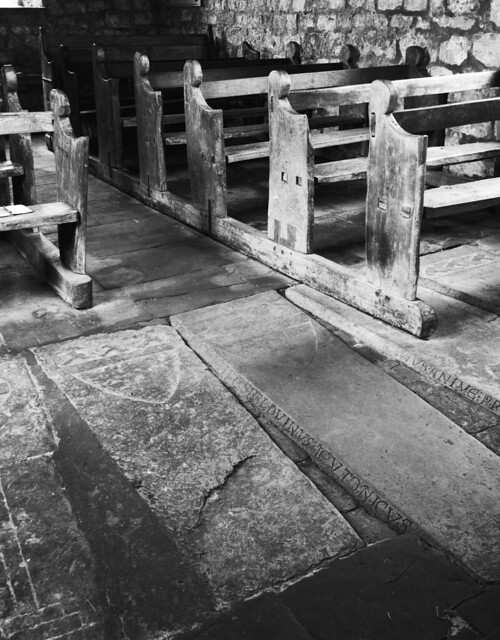 Pews, and grave-slabs set in the floor. The light in my interior shots seems a bit stark; it looked softer in reality; maybe just the eye getting used to the light. I may try another developer another time; this is HC110, 1/64 for ten minutes. I will at least read around what other people do with this film. 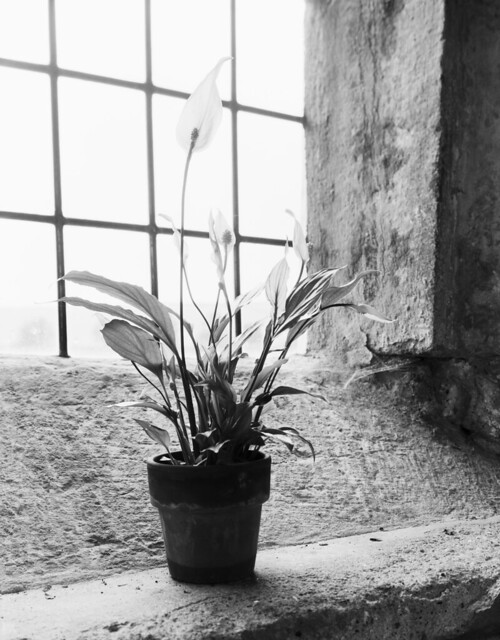 Peace lily on the windowsill. I used tilt to get the whole plant into focus before even stopping down; that left me with the rather wonky-looking window frame.


Scanning these took an age. I was blessed with a couple of dull rainy afternoons when spotting for dust with the clone tool was the perfect activity.
Dustin McAmera, Leeds, UK.
My flickr pages
Camera-wiki.org
Top

Fantastic results! I wish my first forays into LF were as successful. Congratulations!
Top

For a first timer you did very well. Great subject matter, exposures, and framing.

Thanks all! I need to get out and do some more, as soon as it stops raining here!
Dustin McAmera, Leeds, UK.
My flickr pages
Camera-wiki.org
Top

Dustin, I think that you are off to a great start! The Calumet CC-401 is the Pentax K1000 of the 4x5 world. It might not have all of the bells and whistles and brand chic of the other cameras, but it can be real workhorse.
-Mike Elek
Top

Thanks Mike!
I have to work out how I can carry the camera around. This trip out, I guess I only had to carry it for about a quarter mile each way, and I just left it on the tripod. With the five-inch lens, I will never need all of the camera's rail. If I had spare money, I'd have a shorter rail made, and the camera would be smaller, if no lighter; I'm not going to cut down the rail I have though.
Dustin McAmera, Leeds, UK.
My flickr pages
Camera-wiki.org
Top
Post Reply
7 posts • Page 1 of 1