Often simply written as "W/NW" - your favorite photos. Explain them, or let your photos (film or digital) speak for themselves.
Post Reply
15 posts

Nice B&W tonality, Phil. I much prefer these to the earlier colour shots. If I mount a Helios rangefinder on the hotshoe of my Nikon D7100, will it qualify for Nikon RF day?
GrahamS
Age brings wisdom....or age shows up alone. You never know.
Top

jamesmck wrote:Nice shots all, Phil. I take it that your CV 25/4 the rangefinder-coupled version. I have the Voigtlander Snapshot-Skopar 25/4 (which I believe has the same optics) with viewfinder, which is a very sharp and pleasant lens to use on an LTM 35mm camera or adapted to a Micro4/3 digital (where is becomes a 50mm).

Yes, but one still needs the add-on finder to properly frame things. I wouldn't mind getting the Snapshot version.


alexvaras wrote:Can't say how much I like those blacks Phil, bravo!

Btw Phil, are you watching Wes Anderson movies lately? I saw two-three photos already that could be taken out of one of his movies

No, I don't do much movie watching, and I can't think of a WA movie I have seen.


GrahamS wrote:Nice B&W tonality, Phil. I much prefer these to the earlier colour shots. If I mount a Helios rangefinder on the hotshoe of my Nikon D7100, will it qualify for Nikon RF day?

Only if you put it in Live View, and cover the screen on the back.

Actually, it's for the whole month of March, and I'm not on the Rules Committee.

And thanks, all, for the nice compliments. I've never seen Ektar produce so much blue, Graham, I wonder if it was the scanning process. Had to dial it way back on that whole roll, yet couldn't quite correct it.

ps: When Nikon brings out their Full Frame Mirrorless, I'm hoping I can get an S mount adapter for it.
Waiting for the light
Top

Okay, these are the last of the images. This was a second roll of Ilford Delta 100 I started, then barely squeaked some through on the last day of the month. There are more from the roll to post, but those will come later in other threads.

I did switch labs, as what happened was I didn't get the resolution I requested, plus all the color scans were way over-saturated, and the b&w was sharpened. The lab went out of business a few months afterwards, likely because of the lack of decent work by the employees. This roll was done at my new choice for lab work at Lynchburg Camera. They would have looked better if I had exposed the film correctly, since Delta does not seem to have the same latitude as FP4+. 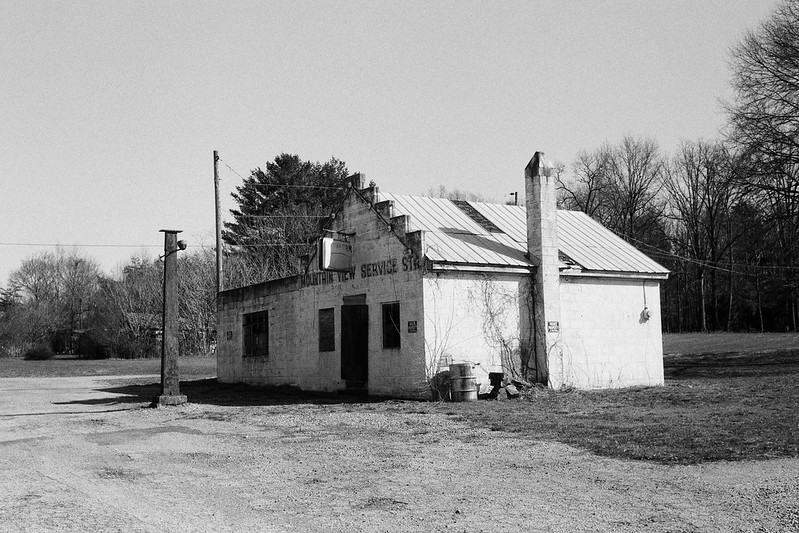 On Grassy Hill Road by P F McFarland, on Flickr 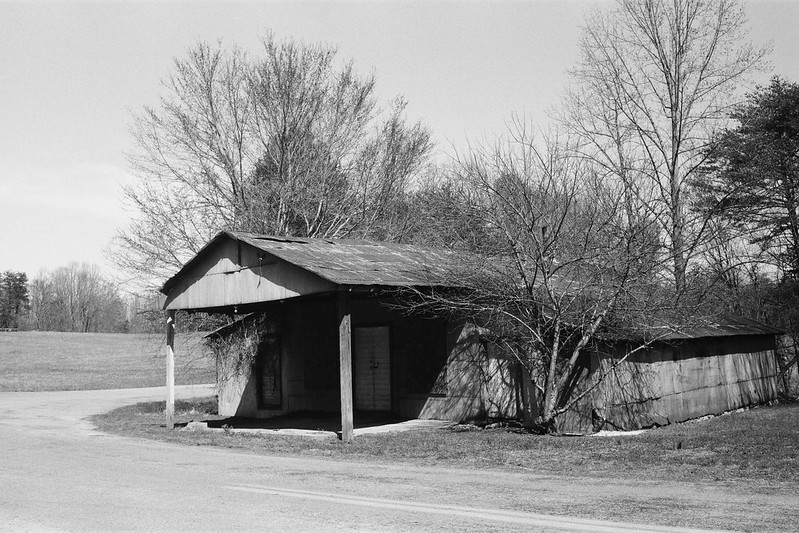 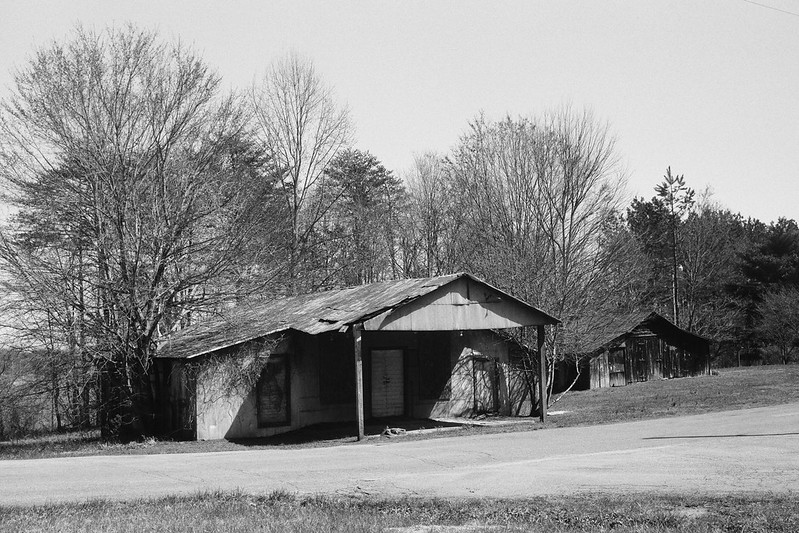 Store and Garage by P F McFarland, on Flickr 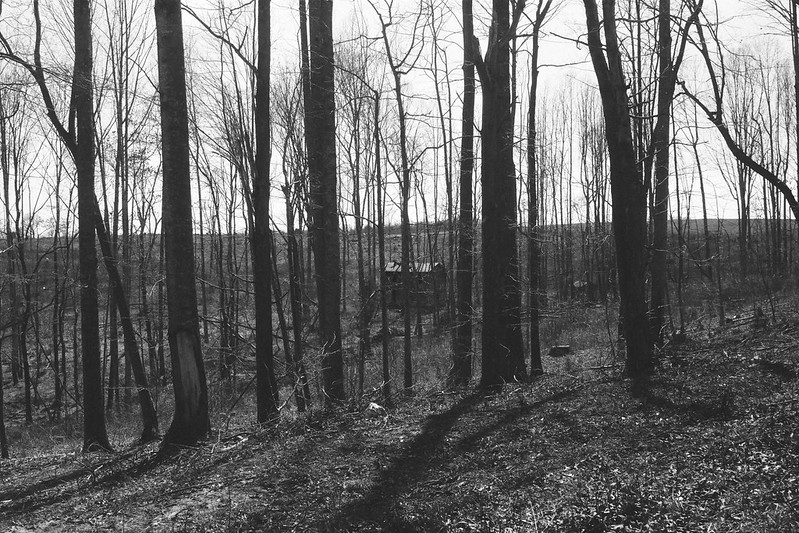 Next, They'll Clear Cut The House by P F McFarland, on Flickr 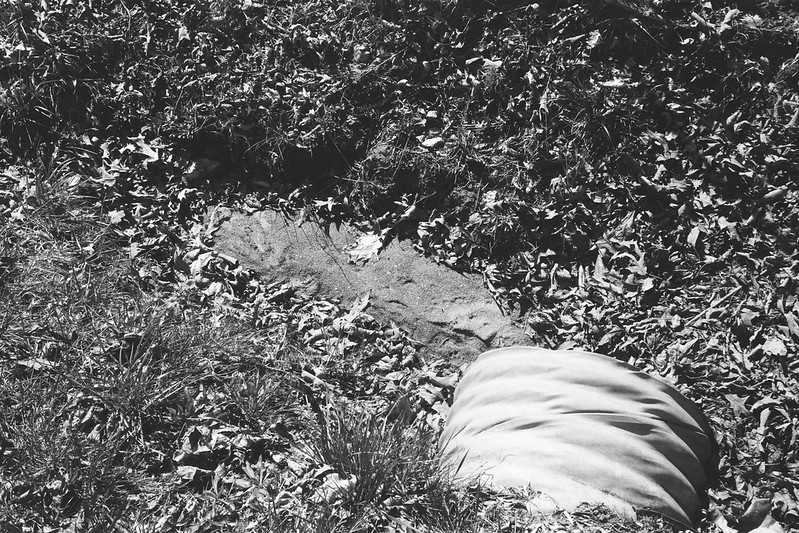 Very nice series, both in color and B&W. I like the Ghost House and the "not interested" one,

Wonder how the S2 feels as compared to an F. Never saw a Nikon RF in the flesh.
Top

Thanks, Julio. The S2 is a lot like handling a Contax II/IIa, as it was the basis for the Nikon design. However it has a Leica type shutter, as Nikon deemed the Zeiss shutter as too expensive to replicate. But it has a better viewfinder than the II/IIa, and lever wind/rewind. Plus, you don't have to deal with an extra cable to use flash.

As for the difference between it and an F, it's mostly in the viewfinder, as now you're looking through the lens, and you don't have that geared focus mechanism to deal with. Otherwise, most everything on the top is in the same place. There is more bulk with the F because of the mirror box, and the size of the lenses. You can get motor drives for both cameras, and 250 exposure backs too.