A lens for my Mamiya RB67 ProSD

Rollei, Mamiya, Hasselblad, Kowa, Minolta, Yashica and many, many others.
Post Reply
5 posts • Page 1 of 1

A lens for my Mamiya RB67 ProSD

I finally found a lens for my RB67 ProSD on evilbay, one that didn't suffer from haze or fungus, as most of the lenses there do.
Upon arrival it looked like new but I did discover that it made a soft 'clunk' sound when shaken gently. This only appears with the front distance ring on the closes setting (1 metre) - not at infinty. When pointing the lens down to the floor you can actually push up the front lens/group about 0.5mm, and when the lens 'drops' down again it makes that sound.

Excercising that ring a number of times back and forth seemed to improve things. Maybe the grease inside got more evenly spread in the threads, cancelling the play of the 'loose' lens? Turning that ring even more suddenly made it slip a bit and the issue came back. Time to shoot a test film. Developed it yesterday and scanned it this morning : the sharpness seems to be OK over the entire frame, although my shots are not ideal to judge that well. I should have shot a boring wall or a newspaper.

Anyway, I think I will keep that lens and handle that ring with care (or not at all). Returning the lerns to Japan for a refund means that I will loose the 58 euros of import duties that I had to pay upon arrival. The seller will only refund the cost + shipping. And he may have to pay import duties as well when the lens arrives in Japan. 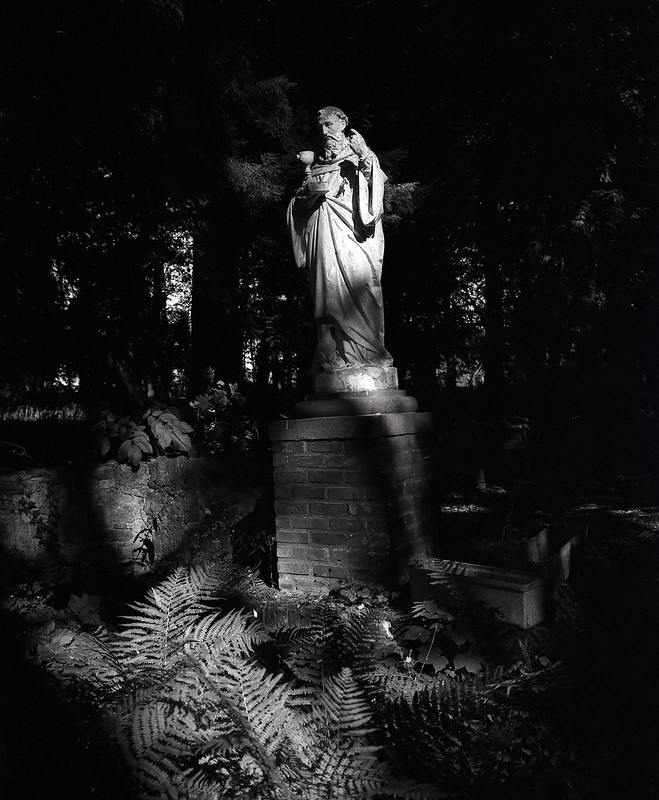 Sorry to hear that, happened something similar with my Distagon 50mm for Hassy, between the lens and the shutter there is an small movement that shouldn't be there... I discovered recently and now one more test to do on lenses when examining them.
So I guess we have to live with it.
Very good picture and quality anyway, congrats for the lens!
Top

I've been pretty lucky with most things I get off eBay. The one lens that really was a problem was a 35mm Schact in Lordomat mount. It was missing some screws when it arrived, so I asked the seller about sending it back, and he said he'd ship me the missing parts. So later on a whole complete lens arrived, with him figuring I could just scavenge it for the screws, but it was a different version, so they didn't match. I couldn't use it as a replacement either because it had a paper aperture. Someone had removed the aperture blades, and inserted a piece of card stock with a hole in approximately f8 size. After another wait, he finally sent me a good lens, and I returned the two previous ones. My only extra cost was the insured return postage, but it was worth it, as those lenses are very hard to find at a reasonable price.

Phil, that's a bit of a horror story that ended well. So far over all these years I haven't had any big issues with gear from eBay, but it had to happen someday I guess. I do have a feeling that the seller didn't know about the issue, he seemed genuinely embarrassed when I contacted him about it.
https://www.flickr.com/photos/bj_stevens/#" onclick="window.open(this.href);return false;
Top

That was from long ago, Benny. My most recent adventure involved a Leica CL with the 40mm and 90mm lenses. First off, they didn't ship it with what was shown in the photos, but with some substitute parts. One of the two Leica lens caps became some generic snap-on. The Leica cap that did get shipped wouldn't detach from the hood. So I ordered a replacement cap for the one that got swapped out because the seller said it got lost before the shipment, and they didn't have another one to send.

While I was waiting for it, and trying to determine if I would need to get a second one, I test fitted the cap I had to the other hood, and it fit. I got to checking the slot that the grippers on the cap fit into the hood, and found that on the one hood it was cut too wide and deep (Leica factory item). This allowed the grippers to get too good of a purchase, and it wouldn't let go when it was supposed to, causing me to have to utilize a screwdriver to remove it. Then after looking at other photos of the 90mm lens, I realized the hood that was sent is meant for the 40mm, not the 90mm, so I had to order another hood. All was good with the lenses then after the replacement hood and cap arrived.

The camera, well, that was a different matter. Someone did a very sloppy repaint of the inside of the camera, with bubbles, and ridges all over the place where the film was supposed to move over either side of the film gate. I sanded it down with some 1500 grit paper, then buffed it with a Dremel wheel until I was satisfied there was nothing left to scratch the film.

With some prior knowledge of the system, and a closer inspection of the description photos, I likely would have steered clear of that sale, but there were not many available with the two lenses included, and putting together a kit out of separate parts was going to cost another $400-600. The seller did refund me the cost of replacing the one lens cap, but I didn't press the issue about the other hood because I found that much later. He also didn't own up to doing the crappy paint job. I think he put together the outfit from items that had made their way to his shop over time. Then some very good customer came in one day and needed a cap for their lens, so he took one from the outfit that was on eBay sale.

Needless to say, I don't plan on buying anything from him again, although he had a very nice selection of Leica items on eBay. It doesn't matter if they are the best priced, and best looking items, I'll never give him the chance to mess over me again.