Post here if you encounter technical problems related to the forum. See a spammer? Report it here.
Post Reply
29 posts

I have just deleted a Post and Banned a user
Looks like it was a probe , but the subject was way off topic.
i suspect he was a spammer ..so a pre-emptive Spammerdectomy was performed.
Anyone see any weird or unsolicited messages ...let the mods know.
cheers

Spam?
https://www.youtube.com/watch?v=g8huXkSaL7o
If we all saw the world the same no one would need a camera.
Top

Another would-be spammer was shown the door. This was a human spammer. But we don't discriminate: human or computer. Neither is welcome here.
Top

To paraphrase moments from the Monty Python's Holy Grail, "Zay are all pig dogs! We spit upon zem!"
Top

I am pretty sure this should be moved to OT but being it is here it shows new folks that we are a fun bunch of old curmudgeons. 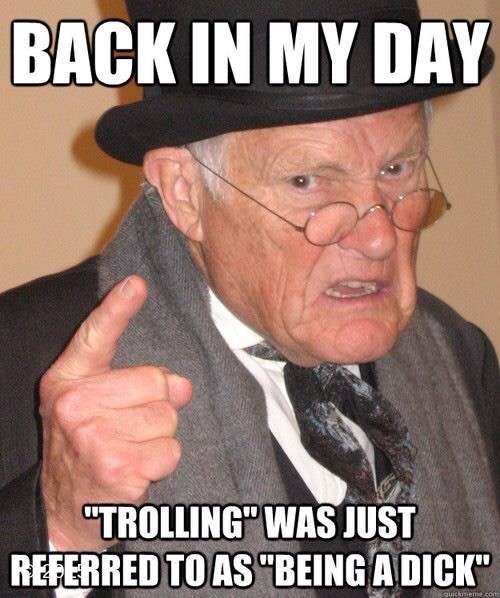 If we all saw the world the same no one would need a camera.
Top

and there is me thinking 'Trolling' is something i do with me Fishing Rod....

....must say though, i enjoy this old fart thing.....
Sharpness is a bourgeois concept ~ Cartier-Bresson
Top

About time Brother.
If we all saw the world the same no one would need a camera.
Top

While trucking through Pa near Pittsburg I almost ran over a troll. He was parked in a 'pull out' near the river and I high -lowed my headlights to let him know that I was there. He pulled out and tailed me and by the side of my trailer. Then he came up by the cab, with his dome light on and I could see that he wasn't wearing his underwear.
It was a cab over engine truck and my driving partner was just getting out of the bunk, I said something and he looked down at the guy in the car, seen what was going on and put his hand on the steering wheel and pushed a little. It was right at an intersection and the guy ran over a center divider, sparks all over the place.
I stopped and as I was going back to see if the guy was hurt a cop that had been sitting there with his lights off seen the guy with his britches down told me to go on, that he would take care of it.
Now this was back in the 60s and trolling was even a problem back then!

If we all saw the world the same no one would need a camera.
Top
Post Reply
29 posts