With all of Pablo's posts about his Super Solinette, I started (WAY against my better judgment) trolling for a project camera. I have a strong aversion to 135 in general, and was looking at MF folders. Which have apparently gone to ridiculous levels in BIN pricing. Started searching for "Super" everything, as I'd ideally want a coupled rangefinder.

Well, one of my very first camera projects was an Ansco Super Memar. Maddie still has it. Withstood years of my beach photos, and a young daughter abusing the shutter. Says something about their robustness. Anyway, Pablo's project made me look at the Super Memars. Found this: 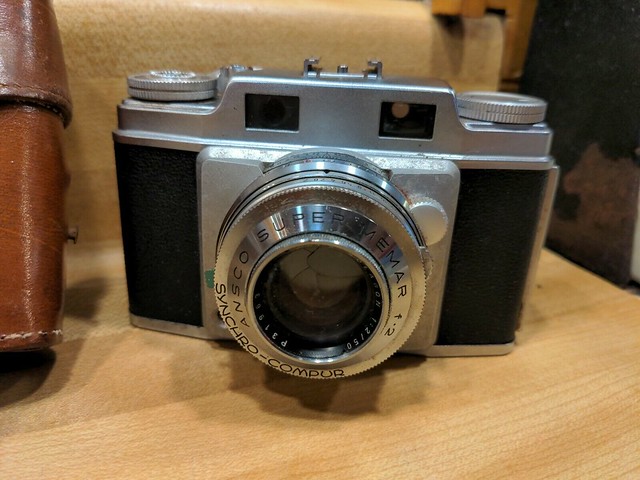 Look closely. It's the 50/2 Solagon in the Synchro Compur. It's listed as "For parts - as-is" even though the seller said it seems in good condition. We shall see. I think the listing kept people away. Not me. It'll be here Saturday (barring any snafus from the local USPS).

It's been a l-o-n-g time since I was into a Synchro Compur, and even longer since I've fettled a Super Memar (though there have been several). I'm really hoping nothing is broken and the lens isn't scratched to oblivion, which is hard to make out in the photo. But if it is, I'm really not that deep into the thing. I have less time then ever, way too many legit projects, but it seemed like it would be fun for a bit, and I'd love to cart this thing around for the summer. It even comes with a case, and I may have to take a try at restitching it. We shall see.

So thanks, Pablo, this is all your fault.

You're welcome!
Synchro Compurs are not hard to work on, I haven't seen one with broken parts or springs
I have only seen one that was hard to repair, someone had mess with it and a part was msssing

Just in case, repair manuals here
https://learncamerarepair.com/productli ... condary=20
Last edited by titrisol on Wed Feb 10, 2021 9:12 pm, edited 1 time in total.
If you can't fix it with a hammer... you got an electrical problem
even duct tape can't fix stupid.... but it can muffle it (SilentObserver)
My Flickr -ipernity
Thanks CE Nelson

Nice find! Looking forward the process and the photos

titrisol wrote: ↑
Tue Feb 09, 2021 3:26 pm
You're welcome!
Synchro Compurs are not hard to work on, I haven't seen one with broken parts or springs
I have only seen one that was hard to repair, someone had mess with it and a part was msssing

That's awesome! Thanks for the link - hadn't seen that one before.

PFM! yes his pictuees are awesome
If you can't fix it with a hammer... you got an electrical problem
even duct tape can't fix stupid.... but it can muffle it (SilentObserver)
My Flickr -ipernity
Thanks CE Nelson

Surprisingly, after delivery was changed to next Tuesday (from Saturday originally) the camera arrived today! I tore right into the package.

The camera is dirty and a bit ugly, but not necessarily bad. I think most of the bright work will clean up nicely with some Flitz. There seems to be some hiccup between the shutter release and the shutter. Cocking lever works, though doesn't snap back like it should (broken spring?), but then nothing happens when the plunger is pressed. Well, that's not entirely true - twice the shutter did release, and the speeds (1/4 and 1 second) seemed about right with no stuttering. The focus works, albeit with a lot more force than should be necessary. Gives me hope that I can effectively clean the helical without completely dismantling it. The rangefinder spot is bright and moves smoothly. The film advance seems to work. The lens is dirty, but I don't see any fungus or scratches. The front group is locked in place tight. Have tried stoppers, erasers, and a tacky rubber mat designed for gripping. Can't budge it. Going to have to pull out the hair dryer on this one. The case is about what you'd expect from an Everready case from the 50s. Strap and one lug missing, stained, needing restitching. If the camera turns out well I may just send it to a leather worker and have a custom half case made (similar to the Konica I from a few years ago:

So, a lot to do, but seemingly a worthy candidate. Would like to get this together and operable for summer.

[EDIT] Apparently the camera being in 18F weather for extended periods didn't help it. As it's warmed up in the basement, the shutter is now tripping almost all the time!
Top

Good luck with the lens, I have here one Heliar from Superb that I already gave up, oven at 50 degrees, freezer, heating fan, acetone, WD-40, clamps for hoose... only left is drilling holes for spanner but before I will test the lens and see if is good enough.
For the leather, I got recently one leather strap for Rolleiflex that was dead-dry... every day I put the grease I have for my Brooks saddle, in and out, leave dry one day, still dry? repeat, now the strap falls wihout any curl and it's nice to use.

I hope you get the camera ready to go and shoot some photos with it, myself I'm checking these camera or similar from time to time but nothing on the local market.
Top

Alex, I'm fixing to take the blow dryer to it momentarily.

As promised, some photos of the camera, as-received. 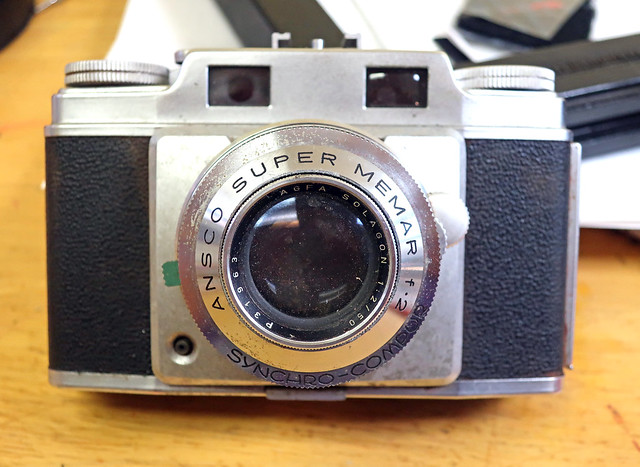 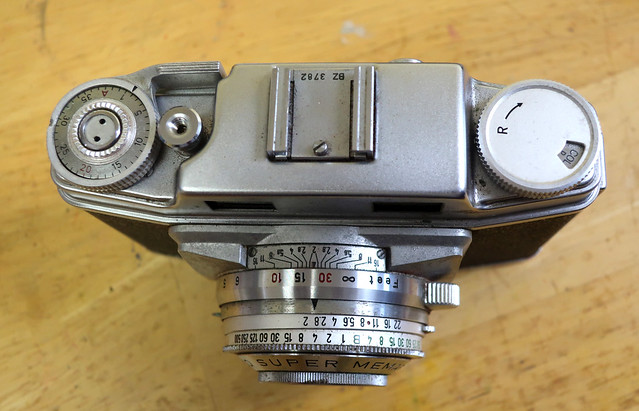 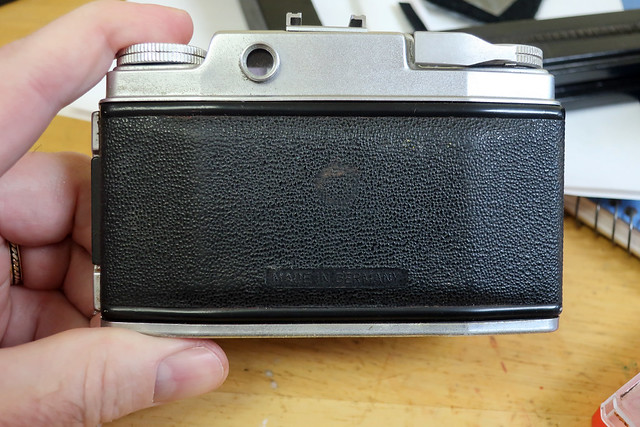 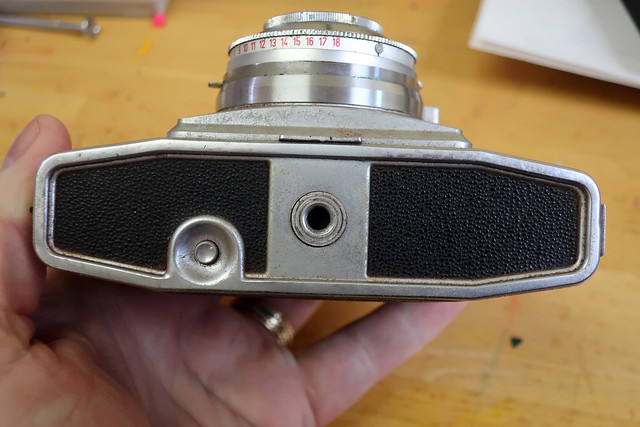 Yeah, heat didn't do the trick. But this aluminum flex wrench I made years ago just fit, and popped the group out in a flash. 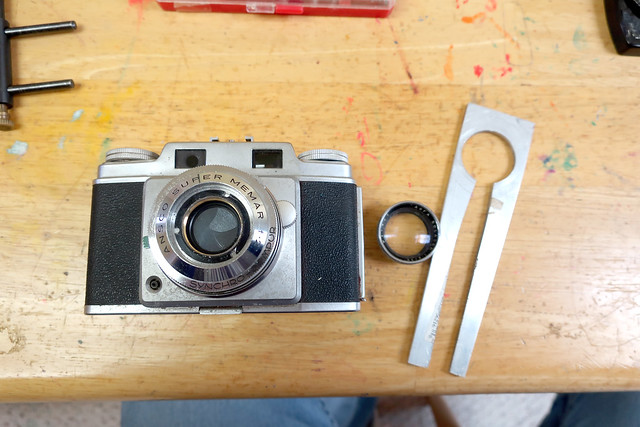 The locking ring was missing the locking screw, and is pretty scratched up, which suggests someone else has been into this shutter before. That, and it actually seems to be running decently. 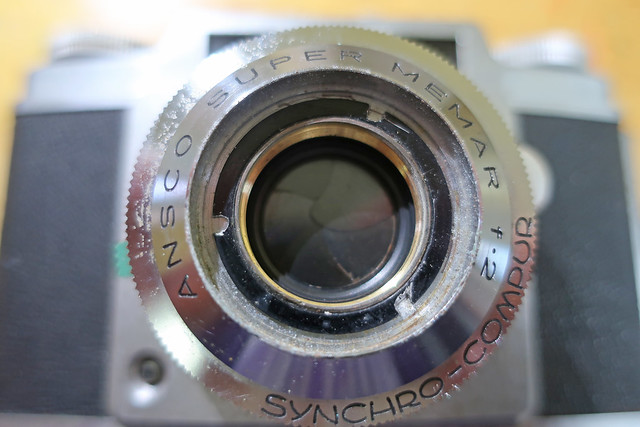 Have the speed ring exposed now: 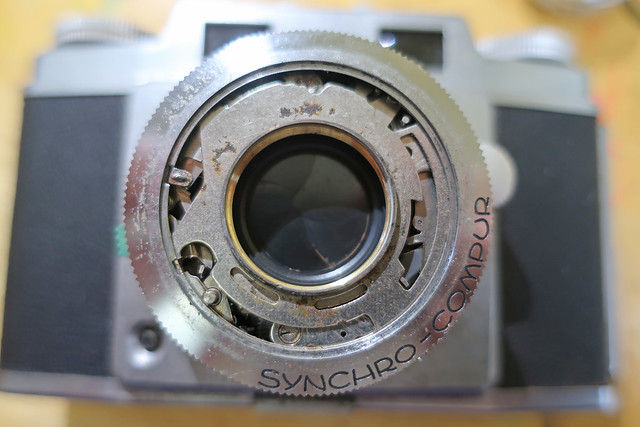 That's as far as I'm going with this right now. I have other things to do, and my mind's not focused on this. I don't want to make things worse through lack of attention. Will come back to this later. Besides, I need to try to remember how to access the helical...
Top

Congrats! I wish I have one of those for 29mm diameter

Users browsing this forum: No registered users and 5 guests