The story that accompanies this camera is that Zeiss Ikon assembled several thousand of these during World War II and then sent them to Sweden in a trade for raw materials.

I'm not sure that I have the story 100% correct, but the truth is today that the majority of the cameras come from Sweden -- or I should say, originated from Sweden. With the Internet, the Tengoflex can be found elsewhere, although many of the ones that you see on eBay are still in Sweden.

Anyway, the Tengoflex has the distinction of being one of the most expensive box cameras on the market today and is a rare breed, because it's a TLR box camera. Well, technically it's a TLR. It has much in common with the Box Tengor, including the Goerz Frontar lens and most of the knobs and controls. The Frontar is an achromat (two elements) and is the only lens from a pre-Zeiss Ikon predecessor company to remain in the Zeiss Ikon lineup until its demise in the 1970s.

How or why Zeiss Ikon decided to make a TLR is unknown to me. 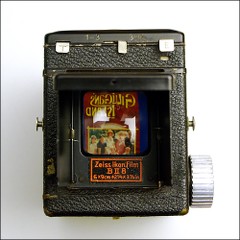 It's a fun camera to use. Slap a roll of 120 film into it, and shoot away. The lens is soft in the corners but suitably sharp.

I don't know anything about the history of this particular camera, but from the condition, it was well used. The body covering, which is the same as what you find on a Box Tengor, is worn, particularly on the corners. And there is a lot of brassing and wear elsewhere on the camera.

Like any TLR, the view is reversed. This uses a brilliant finder. There is no focus knob. Like the Box Tengor (a phrase that you will use a lot), there is a movable lever with a sharp serrated edge to select one of two aperture settings. A small lever on the top of the front panel moves left or right, allowing you choose between infinity to close-ups. A small lens slides into place for the close distance, turning it into a crude triplet.

You have two shutter speeds: I(nstant) and T(ime). There is a large film advance knob, which appeared on later Box Tengors. The shutter release is on the top of the camera.

Here are some photos. All shot with Rollei Retro 400 film. Corporate security won't let you take photos of the building while you are on their property. I just step across the street. An iron gate that was removed by the new owners when the building was sold. This almost has the diarama effect, making me wonder whether the lens is parallel to the film plane.
Or maybe you can only do so much with two lens elements. I tried to position myself so that I couldn't be seen. But I might be in there somewhere. Look at the pretty bokeh, because that's all that's important in photography. Just kidding.

And here's a short video that I made a couple of years ago for someone who asked how you load film into the Tengoflex.

by PFMcFarland
Very well done, Mike. I think if you had a mis-aligned lens (non-parallel to the film plane) it would show up in quite a few photos. The only reason I don't have one of these is the collector prices they usually go for.

BTW, third glass panel from the left. But very distorted, so you look like a potted tree.

by Julio1fer
Interesting, a deluxe box. At first I thought you were kidding with the name.

It works well in the right hands! OOF must be very nice indeed, there is a perfectly round hole cut in metal.

by TobaccorRoad
Good info Mike, learned some from it.
I have a couple of Box Tengars that load about the same. Think that I have only used one once??
I am sure that the twin lens focusing is a pleasure to use compared to the Tengar's small viewing lens.
Is the Tengoflex a 6x6 format? The Tengar is 6x9 I believe?

Among the Box Tengors, the postwar version is my favorite. I need to post something on it soon.

by TobaccorRoad
Thanks Mike, I have two Box Tengars, one all black and one with a fancy bright metal front.
They are in hiding right now, in one of the unmarked boxes ?????

by TobaccorRoad
My Tengar twins, never have used them. I have had them for at least 10 years