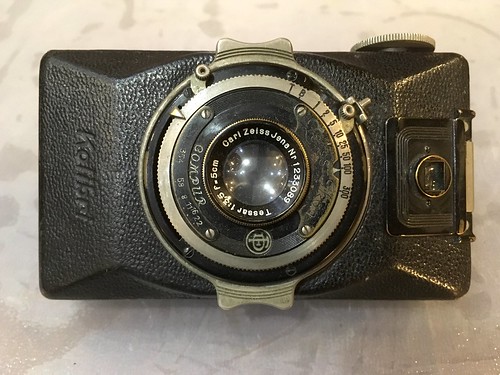 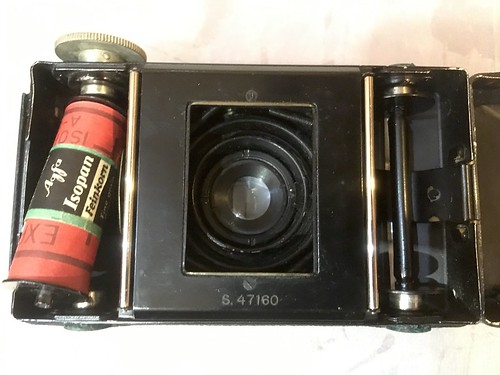 Thank you for watching.
Alex

by LarryD
You can cut 120 film and put it on the old spool. As for developing it you might do better with a one hour semi stand development in Rodinal 1-100 at 20C for an hour. Start it out at 20-21 C and don't worry about the change over an hour. Agitate for the first minute then sit it down Give it about 5 inversions at 50 minutes and then at one hour dump it stop fix awash as normal. You may want to not use an acidic stop bath bath but just a few changes of water with agitation . The old film may not like the sudden stop and get pin holes so that is why I advise water not acid.

by alexvaras
Thank you for the tip Larry, I will wait until I get rodinal.
About the film, how to cut along in the dark the 120mm film?

by LarryD
You will need a film slitter. I got an adjustable one on ebay that will slit from 70mm to 8 mm. Look for Film Slitter.

by Julio1fer
That is a nice classic, hope you can restore it to function.

Waiting for your results!

by LarryD
I hope Gene is doing OK. I have not seen him in ages on any of the forums. That said. If you look around the internet there are plans that if you are handy with tools to make a slitter. I think you can do it by seeing your work.

by PFMcFarland
You might want to try this outfit http://filmforclassics.com/products/ They sell through other dealers, and have a list of who they supply. Freestyle also has a 100 ISO Chrome E6, and 400 ISO Pan. Shipping to Moscow could get expensive though, so look for that splitter.

by alexvaras
Bad news about the film, dark dark dark even the transparent parts are dark grey. Even parts where emulsion felt. I followed Larry's instructions with not stop just wash and then fix. Days later I will try to scan and see what was there.
Julio, yes curly film as Maradona's hair

it was difficult but I handled it finally.
I kept the paper back and tomorrow I will try to get a cigar cutter ror making the 127 film.
As well tomorrow I will finish the service of the Kolibri.
Not very happy but I guess the camera was not stored properly.

IIRC "Isopan" film with no added letters is quite old, maybe even pre-WW2. There were modern variants but always named "Isopan something".
All times are UTC-05:00
Page 1 of 3