Accessories, tripods, the future of digital and other topics that don't fit within one of the other categories.
Post Reply
26 posts 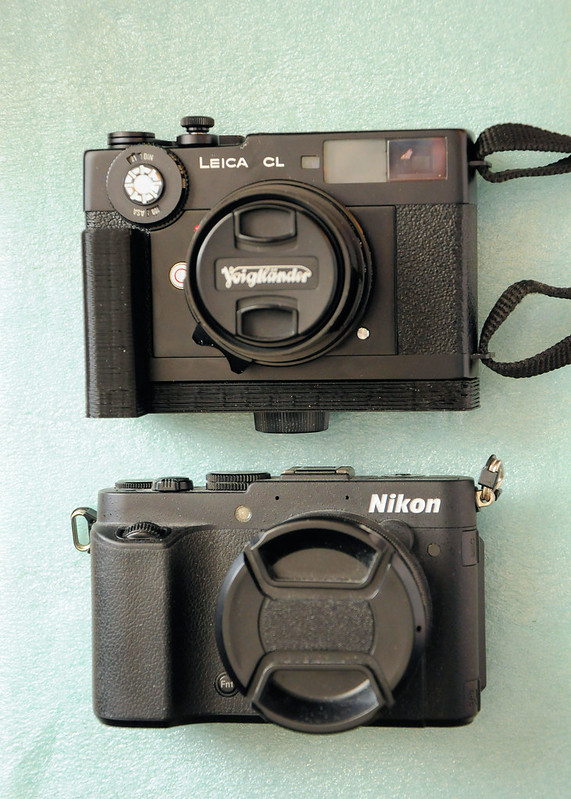 I've always liked the form factor of my Nikon Coolpix P7700, and it's functionality (especially the fully articulated view screen). But it lacks a viewfinder (the one on the P7800 is not all that great either), and has only a 1/1.7 sensor.

The Leica CL seems to be the inspiration for the body design of the P7700, so it got me to wondering.

Since Nikon has now made a big splash into the mirrorless interchangeable lens camera market, I think they should revisit the P7700, and convert it into APS-C with a new mount and line of lenses. Plus a good viewfinder.

ps: Leica has already made a new APS-C CL, though it looks more like a Barnack design. If size restriction is a problem, then Nikon can use the S series rangefinder as a base design.
Waiting for the light
Top

Phil, I think Fujifilm are already there with the X Series XE-3 and X-Pro 2
GrahamS
Age brings wisdom....or age shows up alone. You never know.
Top

I'm just not a Fuji kind of guy, Graham.

Okay, I've done some thinking about that comment, Graham.

The current situation got me to thinking just what I want in a digital camera, and some new models have come out since then. I almost bought an X100F until I found out the store was trying to pass a demo model off as brand new ( the big scratch on the back was included with no charge). And so now Fuji has come out with their improved version, the X100V. It fixed the issues folks were having with the lens being a bit soft, and seemed to be a good alternative to a Leica M, except it was still a fixed mount 23mm (35mm field of view). Then folks started reporting overheating issues with the camera, and it's not clear if that is only when doing the 4K video, or in general use. So I'll take a pass on that one for now.

Then I got to looking at what else they had in the line-up, and checked out the X-E3. I like it in that it has interchangeable lenses, but apparently it's not in production anymore, as some dealers no longer have stock, or are limited to one or two of the six versions that were for sale (silver or black body only; with the 23mm; or with the 18-55 zoom). I can go into the secondary market to find all the parts (and at a discount), but I wonder if Fuji will continue to upgrade the model, or have abandoned it in favor of the X-A line.

I could get a good used Nikon FX body to use with my D series lenses, or a Z6. But then it would be better to get the new Z50 body with an FTZ adapter and use the DX lenses I currently have. But the thing is reviewers are saying the new DX S lenses are excellent on the Z50, though there are only two zooms so far, and who knows if Nikon will introduce any primes for it.

So for now I'm just going to use my D300s cams, and get my Leica IIIf shutter fixed. And keep the X-E3 in mind.

alexvaras wrote: ↑
Tue May 12, 2020 1:17 am
Film camera world is too complicated for me already to enter the digital world

Yeah, it drives me nuts sometimes trying to figure out which direction to go.

I'll be looking for a lens for one brand of camera, but then will come across something for a different brand that I should jump on because it has a low price. So that means whatever I was originally doing will have to wait awhile until the budget allows for it again.

Trying to keep up with all the issues that come with any new digital camera is not easy either, so I tend to hold off on any acquisitions until the dust settles, and they get all the kinks out of the system. By that time they are introducing a new and improved model, and I go in the waiting cycle again.

To keep things simple Most of my cameras are film. As for Digital a Fuji bridge camera is at hand. I guess I am too old now to change.
If we all saw the world the same no one would need a camera.
Top

I guess what I'm looking for is something to completely replace all my film gear. One camera to carry around all the time, and another to do more studious stuff with. Fujifilm is the only system out right now that has such a set-up, but there are still some glaring compromises. Plus their lenses are expensive compared to other brands. It's too bad the X100 series is stuck with one fixed mount lens and two converters, and the X-E3 doesn't have an optical viewfinder. But that's because of marketing more than anything else. It's just like when Ford got rid of the Ranger because they didn't want it to cannibalize sales from the F-150 series. Now you can buy a Ranger that costs just as much as an F-150. Fuji is not going to have one camera do it all unless it's the top of the line model, and you will pay more for all that extra stuff. Even then the X-Pro3 is lacking some things the X-E3 and X100V have. It's the classic yo-yo effect of the digital camera age where upgrades to the models do not always start with the top of the line.

I'm kind of getting tired of waiting on Nikon to come out with something like a rangefinder, but now that they have the Z system that dream has gone out the window.

What a nice thing it would be to have a digital Zorki.

I do 95% of my picture taking nowadays with two digital cameras. One is my Fujifilm X100T, which was a slight improvement over my old X100. A better carry-around digital camera than one of these I can't think of. The slight improvement, for me, was the rearrangement of the manual-autofocus switch so I could more easily move between those two modes, and not get stuck in the third mode which I never use (the one that follows action). The X100 and X100T both *feel* like manual film cameras (almost like a digital Zorki, Phil!) and that is what I like. I had spent twenty-odd years hardly using my SLRs and relying instead on rangefinder cameras, so the X100 fit like a glove.

The other camera I use is my Olympus OM-D EM-2, now about five models away from their most recent ones, but still an excellent camera for my purposes. I have a range of lenses that I was able to buy when I still had some residual cash before I retired, and I am pleased.

I sometimes have sensor envy when I see pictures taken by friends with bigger cameras, but I know that I would never carry regularly a larger, heavier camera. That is one reason I switched to RF film cameras thirty-odd years ago. And I am older now too!

Another reason my sensor envy does not perturb me much is that I also spent a decade or two falling further and further into the addiction to very small film formats (half-frame and smaller) and very expired film. The difference, for me, between full-frame and M4/3 frame is more an aesthetic choice than a technical limitation.

Phil, I hunted down a good, pre-loved, X30, which I call my mini-Leica, and a XE2s, which I call my digital Leica. Both are built to a very high standard and both have a viewfinder as well as a rear LCD. The electronic viewfinders on both are the same unit but being electronic, take some getting used to. The better option that would replace both cameras is the X-Pro 3, although it is a little heavier. It does, however, have the optical/electronic hybrid viewfinder, which is superb. I use my Fujifilm cameras for walkabout (they are "people" cameras,) and I have kept my Nikon D7100 for studio/landscape use. I sold my D610 FX body as I never used it and when I did, I could achieve the same result using the APS-C DX body. I have never come across any situation where I thought "Oh gosh, I should have used a full-frame camera!"

The Fujifilm X-Trans sensor has unique flesh tone reproduction characteristics and renders faces like no other. You can see the product of all three cameras on my Flikr site here https://www.flickr.com/photos/grahamserretta/
GrahamS
Age brings wisdom....or age shows up alone. You never know.
Top
Post Reply
26 posts