Rollei, Mamiya, Hasselblad, Kowa, Minolta, Yashica and many, many others.
Post Reply
8 posts • Page 1 of 1 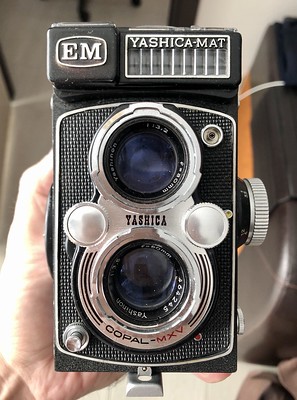 Some months ago I bought in the big site a Yashica Mat first model with Lumaxar lens, I wanted something without light meter, simple and I’m very fond of Yashica since my first camera was a Minister D. The Mat camera was sold AS IS since the owner described a problem of not coking when focus was near, after searching a bit the problem I found some hints and as the price was very good and camera was tested I decided to try.
Camera came and yes, that was the problem and I tried to fix it without success, also I found the front plate was not parallel and bubbling on both sides, before addressing this new problem one work mate had to fly to States so I asked him to send the camera once there to ta very famous repair man for these cameras.
I wrote the repair man and he replied next day with instructions how to deliver the camera, fees and all the stuff.

My friend took the camera and he sent it, some days after the camera arrived and I made the payment addressing the problems, track number, return address and usual stuff. I wrote to the repair man to confirm the camera arrival and estimated time for the repair.

I wrote back a week later and again nothing, some weeks later I phoned and I the voice message showed up after some tones (for international calls I use Skype normally).
In one forum appeared a thread about this repairman and I started to contact with another user sharing our experiences, it seems as I read many times that phone was the best option to reach the repairman and I tried several times till I decided to use the mobile phone just incase something wrong was going on with Skype but still no contact.

One day I got a email from him and saying that my camera was in very bad condition and he would ship it that week but in my forward address in States nothing arrived, two weeks later I got another email asking me to phone him, I had to write him in advance saying it was me trying to reach him, this way he picked up the phone.
He said that my Mat body was beyond repair and he asked me if I agreed for a body replacement, I said yes and also he asked me if I wouldn't prefer a Yashinon lens instead a Lumaxar because the coating were better, also I said yes.
- IMO if the best repairman for this camera asks me this I would think why not if he says so, if we sent camera to repair it's because we trust them.

A week later a parcel arrived to my address in States and two weeks later I had it in Moscow.

The camera I received is the one shown above.

I won't mention that I was surprised, a body replacement is not a model replacement.
Anyway I thought that I have a camera repaired by him, a newer model and it's pristine and right away I tested all it's functions and the only thing needed was cleaning the lens elements (a bit of fungus rear and light haze ahead) it can happen I thought... So I loaded a roll and I shot it in a couple of weeks.

When I develop it I was the usual light leak that comes from the rear lens moves in/out, as something wrong was with the
felt that does a light trap 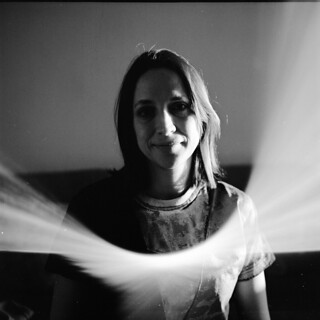 and also some minor light leaks that could come from the shiny tip of screws in the film chamber.

I had this leak in three photos only, the ones I did close focus, other two photos were done outside in a sunny and winter day (-10 degrees).

I wrote the repairman with this problem, no answer, rang and left a message, nothing again.

Trying to get the error again to verify the source (darkroom and flashlight with back open didn't show anything) I got two more problems, first the counter didn't go back and second between frames 3-4 and sometimes 4-5 the winding got stuck and one frame was lost.

In here I just made my mind, I wrote the repairman with the new errors and I asked him for a refund, my position was that if I paid for a full working camera I should have one, if mine was a disaster and I bought a 'lemon' that's it my problem but I shouldn't have been offered a body change, just say, your camera is falling apart, nothing can be done, here is your money except the time lost with it or the whatever it's done in these cases.
I got again no answer and next day same play, phone, email 'hey it's me' and phone again, he picked up, he was busy so I told him please read the email.
I got a reply for the serial number and the refund would be issued, I sent the info and I got the refund. This is how the story ended with him.

The camera was in my workbench, I had a Hugo leather replacement bought during the waiting time so I could replace the destroyed skin from the first MAT model plus a nice set of Walz set of hood and filters for Bay I.

I thought I would leave the camera rest for some time but it was beyond my patience...
I opened the crank panel and I saw the little plastic that covers the counting was unglued and the counter couldn't move back to zero then I felt bad, maybe after all the cold got it loose, I don't recall if it was there or not (even could happen during the flight) but today I looked for further the frame 3-4 problem and I saw a metal part in the crank system not doing the right contact, I bended it a bit and now it works fine.

So I removed as well the focus panel, the front panel and all the parts the light could get into the rear lens and cause the leak, this camera was never (at least recently) CLAd, grease for the focusing system except the moving parts was mostly solidified, in fact the focusing panel was never opened, brass screws needed acetone to come out.
The felt used for the rear lens seems ok, not new but it seems it does the job, still I can't see any light leak myself in the darkroom. I will shoot again a single roll using close focus in a sunny day.

Now I need to think about this, I don't think that there is any bad intention in all that happened, it sounds more old repairman with many job trying to find solution for his clients the best/fastest way possible.
From one side I feel I shouldn't have claimed the refund but I don't think it's fair either for me, I guess I see myself in his shoes in maybe many years and I feel sad.

Thank you for reading so far till here, it's not my intention to judge, I needed to write about this.
Alex

PS: I got nice photos as well from that roll, such as... 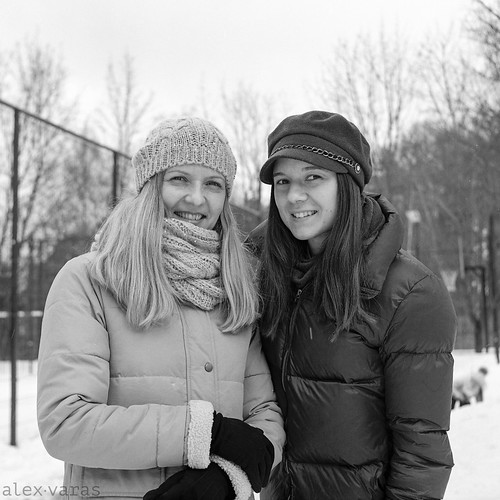 Alex, the Yashica Mat 6x6 models are pretty basic and easy to repair, with a little know-how. I have a Yashica 12 - same as the Mat EM but with a CDS meter.
GrahamS
Age brings wisdom....or age shows up alone. You never know.
Top

Sorry that happened to you, Alex, what a hassle.

I've had great experiences with Internet-recommended repair people (Carol [Flutot] Miller, Youxin Ye) and the opposite (a Rollei repairman who may just have been having a bad day) and it seems to me that they're all getting older and some are aging more gracefully than others...

If it's "THE" Yashica guy, I had a negative experience with him years ago, too. I can commiserate.
Top

that sucks!
but you have a workable camera, just count your loses and keep movign my friend.
If you can't fix it with a hammer... you got an electrical problem
even duct tape can't fix stupid.... but it can muffle it (SilentObserver)
My Flickr -ipernity
Thanks CE Nelson

Thank you, all, for the good wishes and advises.
Yes, it’s him, Scott.

I shot another test, all fine in close focus, still I need another test otherwise I can’t trust the camera, the other issues are fixed.
Top

The older Yashica TLRs are good cameras, and will last a long time if well taken care of. You did a good job of sorting out that EM. Unfortunately Mark is getting older by the minute, and a bit irritable at that, so sometimes his idea of what you want is sometimes not going to match with reality. My own recent interaction with an elderly camera repairman didn't come out as bad, but I still got no satisfaction out of the deal.

I sent in a Leica IIIf for a shutter replacement, and when it came back the flash sync no longer worked. So after a couple of e-mails I convinced the gent to take it back for repair. When it came back the second time the flash sync still did not work, and his letter that accompanied the camera made no mention of him even checking it. I fired off another e-mail, and this time he called me. He tried to tell me I didn't know how the flash sync works, how he worked at Leitz for many years (as it turned out only a few of them were in the camera factory, the rest of the time was with the microscope division) and he knew more about cameras than I ever would. That was bad enough, but then he started bad mouthing Don Goldberg, calling him a hack.

At that point I just didn't want to hear it anymore, so I told him he'd never get any of my business again. I should have seen it all coming though because his eBay advert said he worked on any brand of LTM cameras (and I've got three others with bad shutters), but he informed me that he only works on Leicas.

It happens to all of us at one time or another, so sticking with repair folks who have good customer service relations is the way to go.

From all the comments received I should learn that more important than having success or not repairing is having a good and honest communication with the clients, I think I try to do that with my own and most of times they ask for a perfect 1/500th in leaf shutters I recognise them I can get 1/250th or 1/300th at best, still I need to improve in a couple of fields... I have two more Rolleis and the owner doesn't mind if I take long time for trying and trying again so I have a new target for the incoming month

Btw, I basically covered any outside light entrance to the shutter with the Mat, I placed the dark cloth in a way it doesn't interfere with any knob or function and covers any light entrance. 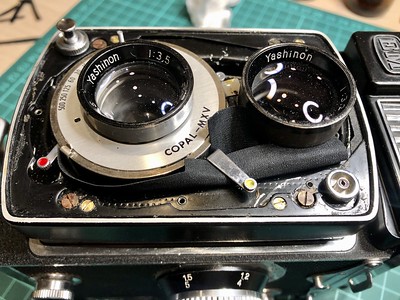 Last test shots are fine, I was with the camera in direct sunlight and there are no light leaks into the film.
Now it's time to forget this camera for a while and use another one...
Top
Post Reply
8 posts • Page 1 of 1