I'm falling in love slowly with these little cameras, I saw an ad of this one and how good preservate it is and I got it, about 50$, lens is Xenar 7cm f/3,5 and although the owner told me was pristine I found some marks at the rear lens I can't remove, anyway on the second market here once you pay the camera is yours unless you have an agreement with the buyer (in my case the buyer is from St. Pete), he argued he has strong diabetes and his sight is not good due age, etc..
Well, I did nothing to the camera but clean the mirror and glasses of the prism finder, now it's pretty usable. Once the collimation was checked (absolutely perfect) I started with a new 127 roll film from a TRI-X.

Now imagine Peter Sellers at his best trying to do a 127 film roll from a 120 roll, that was me during 1 hour it went the process... I cut a bit wider the roll than I had to and all began there... I tried to re-cut the excess but I tortured even more the film (omg how curly is this Kodak!!) then I tried to place the roll on the 127 paper back I have, mostly all the paper back now is not usable and I have to redo one from Delta 100 leftovers, I failed absolutely and I thought... this is going to be the first "227 film" camera and I decided to use the TRI-X without the paper back, similar to 220 film, and I took the camera and using the cut paper back I started to count half-turns of the knob for every frame, it turned out I could get up to 9-10 shots!! 8 half-turns first frame, 7 second, 6 third, 5 fourth, 4 1/2 fifth and 4 after this till the end. Pretty easy I thought and I taped the red window with electrical tape, three times just in case...

I took two photos at school and I think the first one I got some double exposure because it's black, black, super back, winding was ok, following the numbers until today that just in case I did 5 half-turns instead of 4 and finally I ended with 7 frames which one is black.
Today putting the film in the reel was much easy, just push hard, btw the negative got broken parts (rips off) once inside the camera and another putting the film on the reel.
Here are the best ones, notice how damage is the negative, my fingers where everywhere trying to cut to 127. 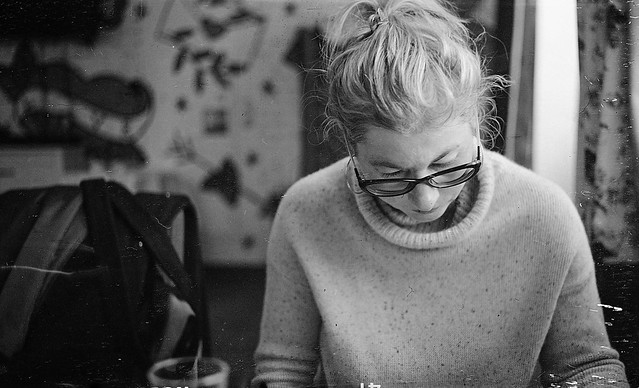 Choosing what to eat. 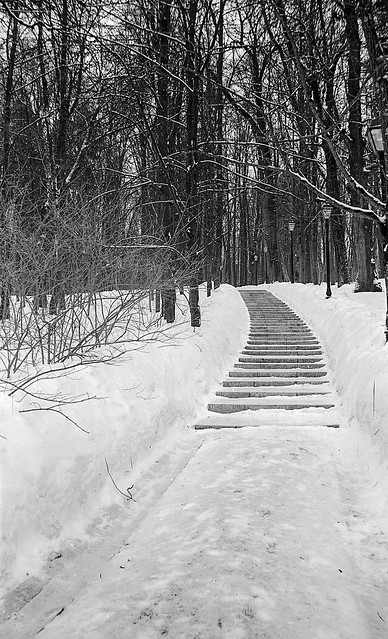 Stairs in the park. 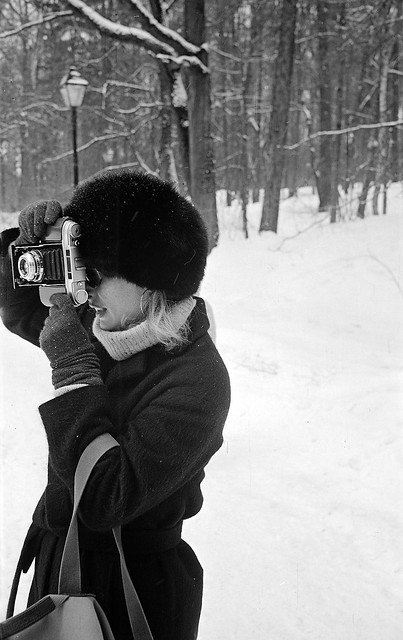 And here the camera resting at the restaurant after the walk. 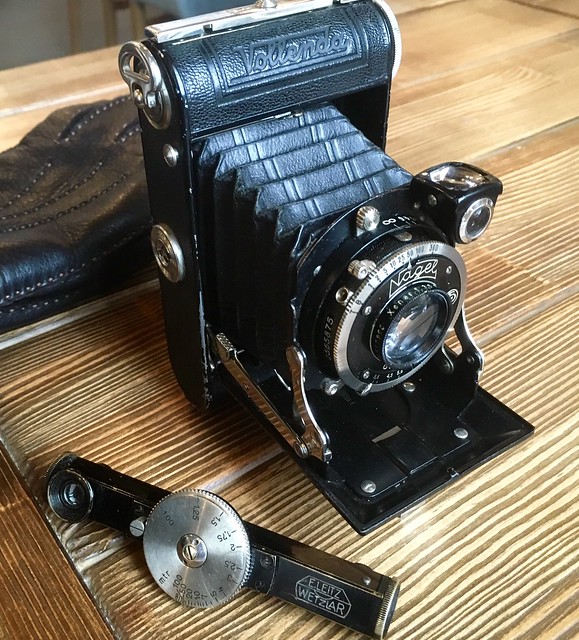 For focusing I used that Leitz rangefinder, I haven't found any better that this one, very long distance between two glasses and big wheel for precision, I have no idea how many year it has, but it's as accurate as a construction laser meter tape and way cooler!
Handling with gloves is perfect, no need to take them out, only the shutter release is at the end of the it's way, normally they are half way.
Still struggling with parallax composing, I can't remember it at all.
Firstly when I saw it was 4,5x6 I though, "uh! I don't like this format, I tried it before and it's not my thing" and now I think that I did before with Mamiya 645, the A16 back for Hassy, Bronica ETRS... that's something compressed comparing to this!! It's like comparing PAL/NTSC with Cinemascope at 2.35:1. After seeing the vertical frames I did I see I should have gone horizontal all the way even for portraits, a lot of space to negative the subject on place and tell the story, much to learn with this little camera.
About the lens, I need a hood and about the marks at the rear lens I haven't noticed anything, most of the shots where at f/16-f/8 so it's normal the photos are sharp enough.
I think I'm going to order the device from a guy for doing the 127 roll much easier than my method

Thank you for watching and as always comments are welcome, if I did something not correct and I didn't mention please let me know, I want to improve.
Alex
Top

Alex, these are really nice. The Vollenda Type 52 isn't often seen. You usually see the Type 49. Nice work with the camera!

The Xenar is very highly regarded and every bit as sharp as the Zeiss four-element lens (Tessar).

The camera that you have is in excellent condition, considering that it probably was made more than 80 years ago.

Thank you, Mike.
I was very surprised for its condition and the handling is very very smooth. I'm on half way of doing a better 120 to 127 film maker, I saw some ideas I want to copy

My wife took over Super Isolette, I'm waiting her to finish that roll and see what she did, other style than mine, more like imaginative.

Finally I did it, I bought a device to cut the film to that side and it works fine.

Indeed they costs a mini fortune, mine was at fair price considering, but I have to tell it's so accurate as a laser meter.

I did a new shooting with the Vollenda 52, using Tri-X 320 film outdated in 1984, cutting it was hard, old and curly film a bit short for my taste, I will modify the device to cut .5mm-1mm wider. I got 11 photos from a 120 film, I marked new numbers on the back film and I did it shorter to fit inside the roll chambers, another post will be for explaining how-to.

Some samples before talking of developing this old film. 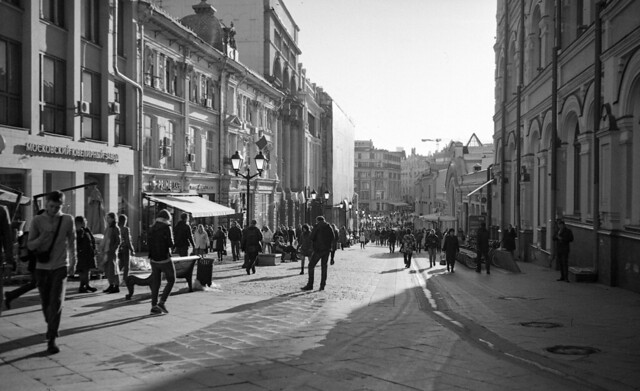 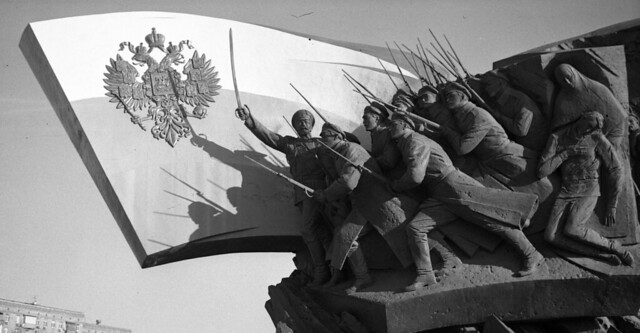 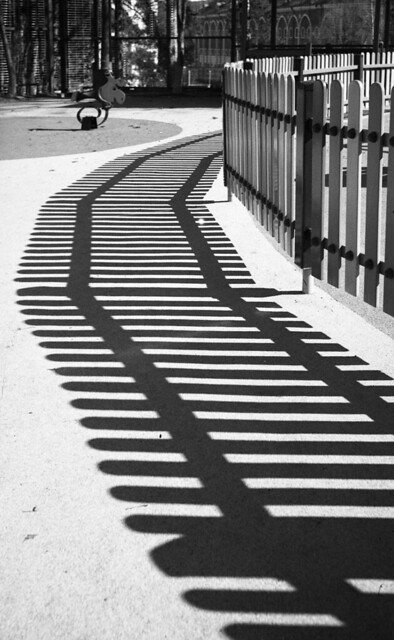 I shot this film before and I concluded ASA 50 would be fine, I developed as per instructions (9 min at 20 degrees HC-110 dilution B) the negative is pretty dark even in inter frames. The preview scan placed the histogram very right sided and narrow (the scanner did a very good job after all) so I have some questions:
1.- Were too over developed?
2.- Over exposed? (metering was fine)
3.- Both?
4.- I can live with it and shoot others the same way.

I have 5 more roll of this and I kind of like it.
Conclusions about the camera, no leak lights at all, good lens, better framing through the top viewfinder rather than prism viewfinder, very very light and panorama style shooting and fun to use. I wonder if I would do better with an Exakta Model B for perfect framing or keep the portability of this camera.
On my way are some 127 Kodak color film I will do use when they come

Thank you for watching,
Alex
Top

I don't know if the mirror finders were ever meant to be accurate, Alex, as they have so much distortion no matter the brand. I usually just make sure there is plenty to work with around the edges for when I have to straighten horizons, or crop to size.

Those frames are not bad at all! Good job!

As for development: your Tri-X 320 expired 1984 is 35 years old. Film fogs with age because of background radiation. If it was kept in the cold, the most important defect would be fog. Higher ISO film fogs faster. In my experience the limit for good images with ISO 400 film is about 10-15 years expired. After that age, quality goes down quickly.

From your images it seems that the negatives are pretty dense, probably too much even for a good scanner. 50 ISO seems too low from my limited experience with similar film (mostly old HP5). I'd suggest trying ISO 200 or even box speed.

If you shoot at 50 ISO, which could be good to defeat fog, you should use a very short development time, best found by trial and error. For 50, I'd start at half the recommended development time for ISO 320.

HC-110 as concentrated as you can should be a good recipe to minimize fog, but fog it will have, a lot of it if you compare to fresh film.
Top
Post Reply
8 posts • Page 1 of 1

Users browsing this forum: No registered users and 4 guests