Questions and answers about developing film, enlarging and making your own prints. Also, topics on scanning your negatives, transparencies and photos.
Post Reply
27 posts

Passing the time while suffering from a bout of everyone's favourite virus, I came across a few articles and videos on black and white reversal processes. I'd been keen in the past to try out Agfa Scala, but not having anywhere in NZ to get it developed meant it would have been a very costly exercise. I came across some methods that used relatively easily obtained chemicals, with one in particular piquing my interest. It uses standard B+W developer and fix with the bleach step using a solution of Hydrogen Peroxide and White Vinegar.

So, a quick scour of a few places and I got myself some 3% peroxide. Everything else I already had to hand. I shot a test roll of 35mm with some Rollei Retro 400s shot at EI200. The advice is to overdevelop the first development stage, but with no clear times I took a guestimate on time for Rodinal 1+25 of 15 minutes. Rather than 20C, I developed it at 23C since the recommendation is the bleach step be close to 30C - I still chose to do an intermediate water rinse at 25C but standing the tank in some warm water to bring the temperature up a bit more and avoid any thermal shock. Then it was into the bleach solution for 15 minutes, followed by re-exposing the film to light. Next into the Rodinal I'd saved from the first development, then rinse and and fix (apparently the last fix is not strictly necessary).

Success! The slides are a little dense, which means I need to extend the first development time a bit more, but scanned reasonable well. They'd no-doubt project quite nicely.

After first development and bleach: 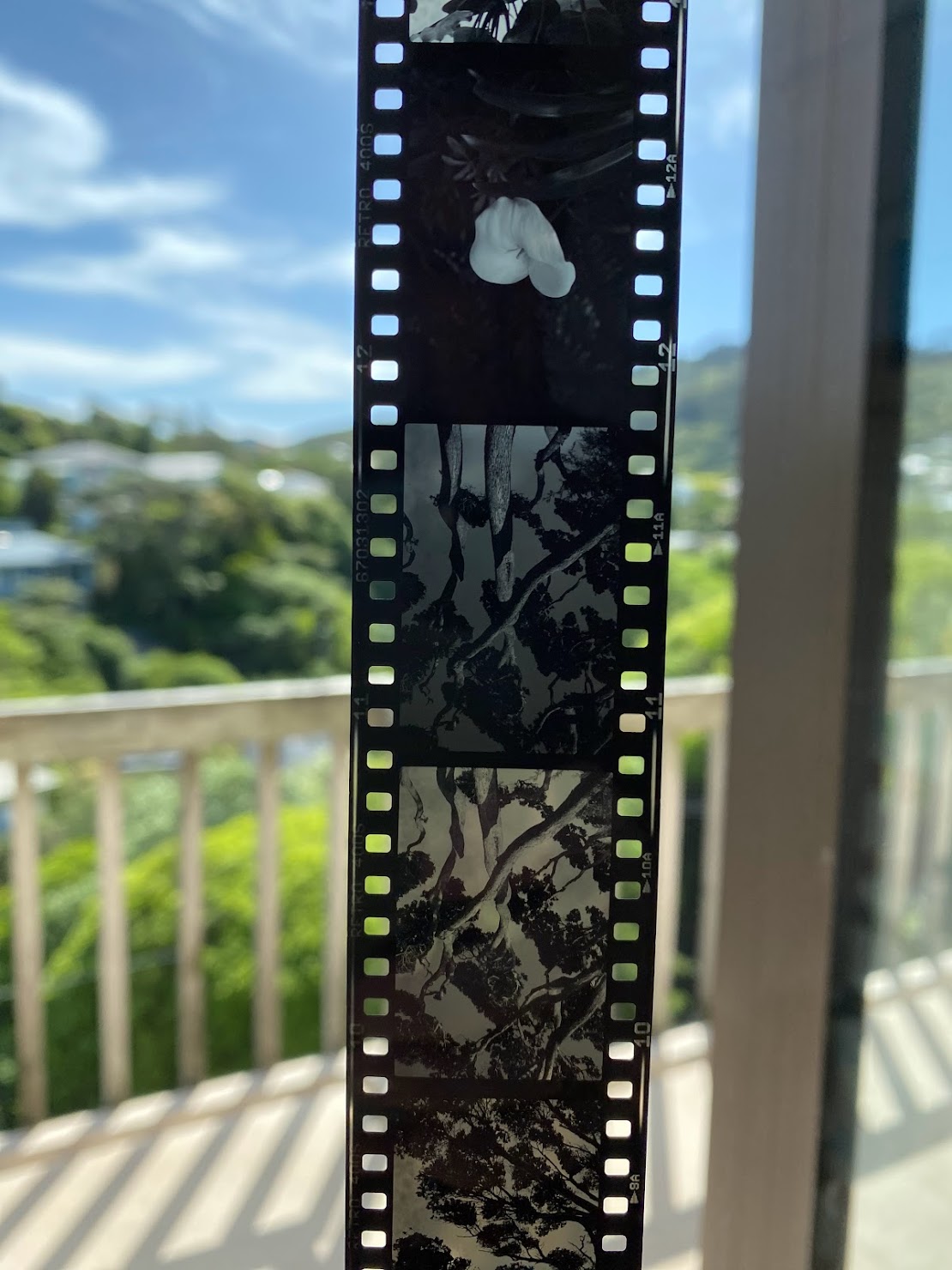 (yes, I probably should have hung the strip up the right way!)

On Sunday I went and shot a few sheets of 9x12cm film in my pre-war ZEH Zeca. I'll be subjecting them to some reversal soup too.

All in all, quite a fun experiment, and something I'm keen to experiment with further.

Here's the video with the process I ended up following:

VERY Interesting, what is the bleach proportions?
If you can't fix it with a hammer... you got an electrical problem
even duct tape can't fix stupid.... but it can muffle it (SilentObserver)
My Flickr -ipernity
Thanks CE Nelson

So that is just modifying the pH to about 3.0-3.5 which makes the peroxide radical more stable and prevents rapid decomposition
H2O2 is generally sold in pH ~5 to stabilize it, but acidifying further will help in making less bubbles, and more chemical activity
If you can't fix it with a hammer... you got an electrical problem
even duct tape can't fix stupid.... but it can muffle it (SilentObserver)
My Flickr -ipernity
Thanks CE Nelson

I did a lot of experiments on reversal processing of B&W some time ago, in dialogue with Donald Qualls, and came up with a reproducible and robust process, although using the traditional bleach of potassium permanganate. Exposure proved impossible to nail for some films, so i ended with a tray method that worked for me. Will look for the document and post it.
Top

PC, FWIW these are my old notes on the process. The basis was the Ilford document, where the formulae are given, although I modified them a bit.

I emaild Donald, he still lives about 1h away from here, and is a resource as always.
I asked about his website as well, will report if and when he answers

Information is still in Wayback Machine, Donald is not making a new one, his provider stopped providing domains in 2013
If you can't fix it with a hammer... you got an electrical problem
even duct tape can't fix stupid.... but it can muffle it (SilentObserver)
My Flickr -ipernity
Thanks CE Nelson

If I were doing it again (not out of the question at all) I'd probably use copper sulfate followed by an ammonia bath. Based on results I've seen for peroxide bleach, it causes color shifts in the final product as well as being a little unpredictable. Acidic copper sulfate with sodium chloride will convert the image silver to silver chloride -- which is soluble in ammonium hydroxide solution, unlike silver bromide or silver iodide. This should give clean bleaching (work in front of an exhaust fan, though) without affecting the final positive image.

A very good alternative now seems to be XP2 Super, which can be reversed by developing in B&W first dev, then reversal bath or exposure, followed by a normal C-41 process (might want to run the color dev a little longer than normal). The bleach and fix or blix will remove all the developed silver, and you'll get a positive dye image. Slight pink base tint, but otherwise should make good slides (got a roll in my Stereo Graphic, but it's hard to carry since the case strap broke).

What I like about the process I followed is that it uses easy (for me at least) to get hold of chemicals that are fairly benign. I've watched some videos with people using Cafenol as the developer. It seems from my reading & searching that this process is quite popular with the 8mm movie enthusiasts.

I'll develop a couple of the 9x12cm sheets with the reversal process and post the results (good or bad).
Top

A nice experiment and great results you seem to have gotten too. You have way more courage and energy than me when ill - I tend to lay down and sleep away the time...

Return to “Developing, Enlarging and Scanning”